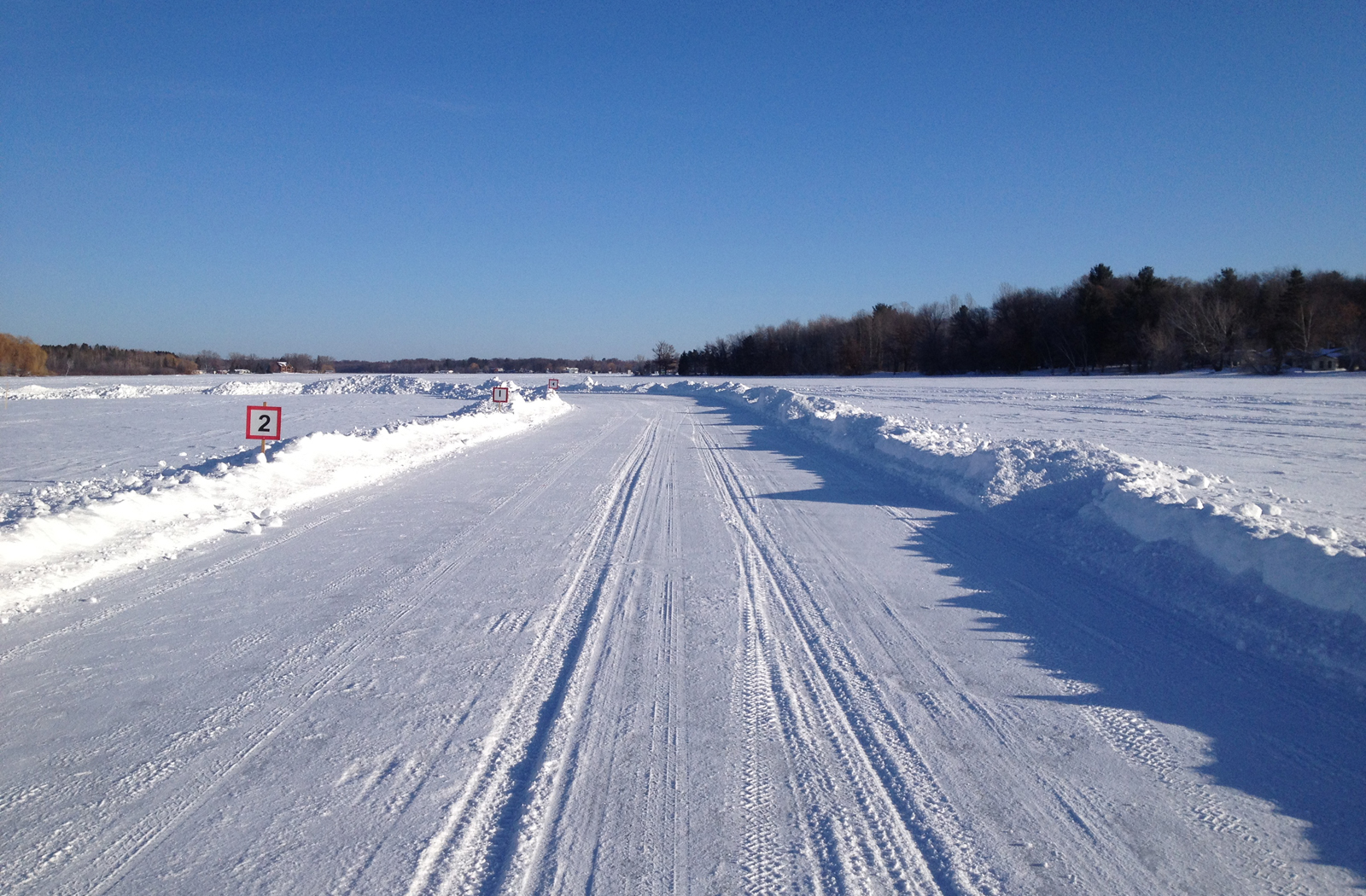 My annual Minnesota ice racing adventure is trip into a parallel universe. A front-wheel drive modified street car with studded tires on ice drives nothing like a Formula Ford with slicks on pavement. Inside out, upside down.  For one weekend, I must relearn how to drive a race car.

Tire characteristics explain most of the difference (see chart below).  On pavement, a racing slick’s cornering force increases linearly with slip angle before a soft peak at about 6 degrees. A studded ice racing tire generates far less cornering force and, because of stud geometry, builds up slowly to a relatively sharp peak…at 30 degrees! 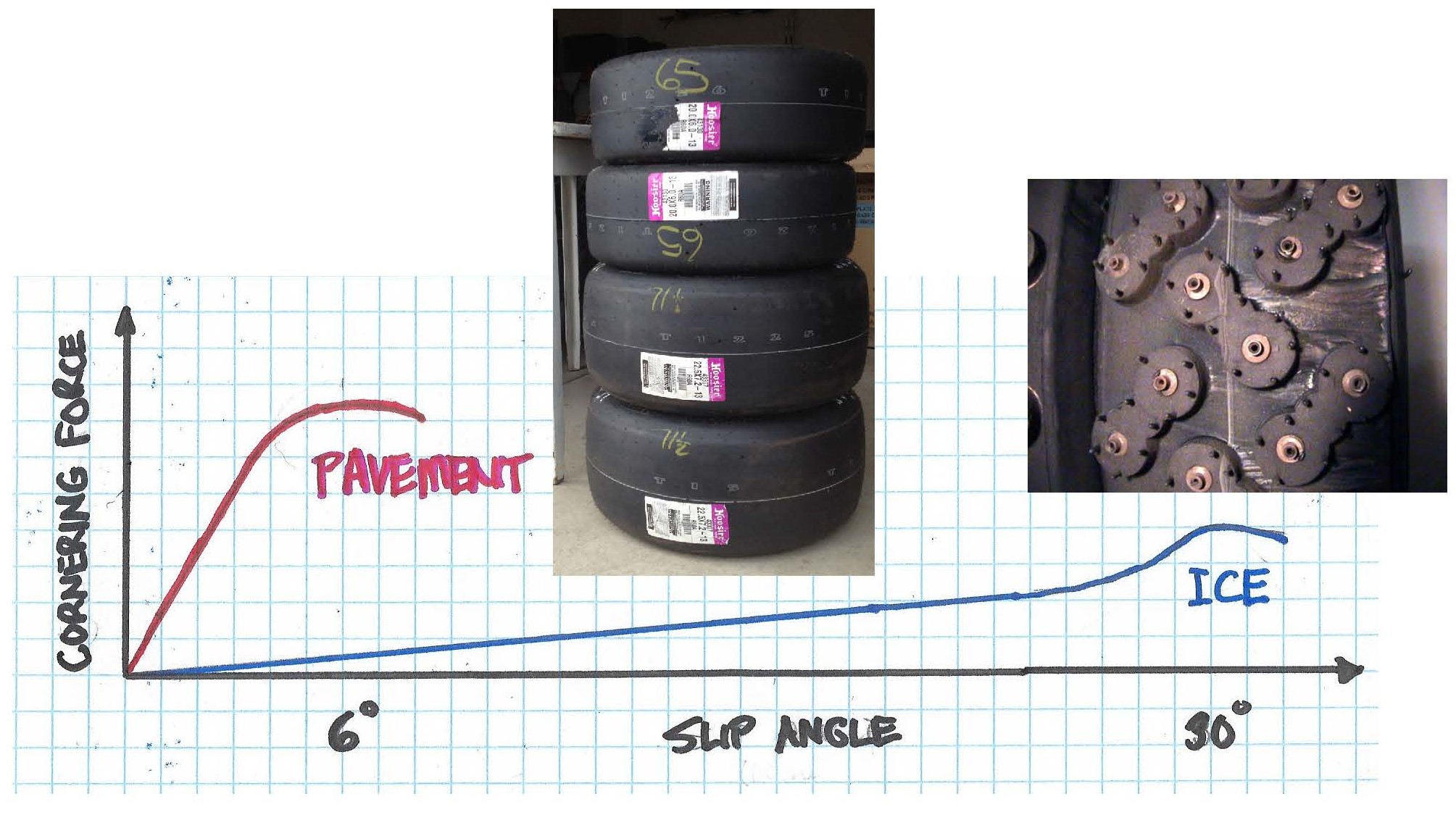 On ice, straight line stability is frighteningly absent. Since ice racing tires don’t generate much cornering force at low slip angles, the back of the car wanders around at yaw angles that scream “crash” in my pavement racer head. This feedback loop must be turned off. It usually takes a couple of sessions to turn the scream down to a whisper.

A “Scandinavian flick” initiates the corner sequence. On approach, the car is briefly steered away from the turn before simultaneously braking and turning into the corner. In combination, the weight transfer and pendulum effect quickly rotate the car to that magic 30 degree slip angle.

On a short corner, the Scandinavian flick is an easy technique to master. Slide in and squirt off with snow flying.  Beautiful.

Long corners separate the local ice racing aces from visiting tourists like me. The drag from the sliding rear tires can overslow the car. What follows is a futile series of understeering wobbles. Not fast and not pretty.

The studs carve up the ice and snow collects on the outside of the turns. This “cushion” of snow can be used to turn the car…a very clever solution to the long turn problem.  But if you jump the cushion the snow will pull you right into the larger snow banks that line the course.  Ouch!

In ice racing, the track is changing constantly. Ideal conditions for ice racing are cloudy and 20 degrees F. The studs grip the ice and the cushion is snowy, soft, and friendly.  Below zero F, the ice becomes too hard for the studs. If it is a sunny day around freezing, the cushion will be slushy, heavy, and eager to punish the smallest misstep.

Late in the season, the cushion can melt forming huge puddles around the course. These “sippi holes” are treacherous. The best way drive through them is as straight as possible. Otherwise, the standing water will almost bring a car to a complete stop. Here’s a 30 second sippi hole sampler…try not to flinch!

The great Danny Ongais has a simple driving philosophy: you are only going fast when going forward.  The “Flyin’ Hawaiian” would do just fine out on the ice.

For a more complete ice racing experience, here are links to two of my YouTube videos:

Visit the International Ice Racing Association (IIRA) website for schedules, rules, and more on this wacky form of motorsport.